I haven't washed my jeans for three months or more...

And so the post match wrap up that was Russia at its best and worst . . .and we had very dirty jeans but they were still good, bless denim....

Can't believe that a month slipped by so quickly and so tediously all at
once. You may find my choice of language a little contradictory but that
was Russia, full of contradictions at every turn. We have drawn conclusions about Russia based on very limited experience, gross generalisations and Hollywood. This is what we think. . . .

- Definitely full of Mafia and organised crime
- Siberian towns were nice for a short stopover but we will NEVER do that
again
- Russia is food hell (more on that later)
- There is Moscow, there is St Petersburg. . . .then there is the rest of Russia

So we left Moscow with hangovers and arrived safe and sound in St
Petersburg. It was very obvious that we were getting closer to Europe. The Burg (as we liked to call it) was less intimidating, more laid back and much more user friendly than Moscow. Of course, we liked Moscow better, it had an edge that The Burg didn't. Difficult to explain but our guidebook (the one we got from a hostel after losing ours whilst out drinking in Moscow) said that The Burg (they didn't call it The Burg) was the soul of Russia and Moscow was the earthy heart. Where Siberia and the rest of the biggest country in the world fitted in, we can only imagine!! But there was certainly some truth to that statement. 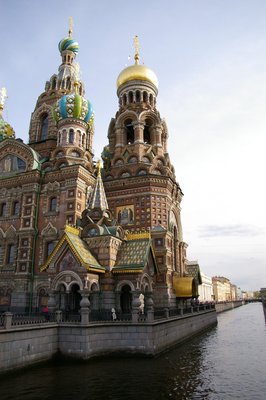 Church of the Savior of the Spilled Blood 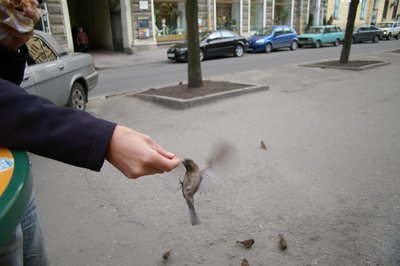 On the 9th of May, Russians celebrate Victory Day (When they finally
defeated the Germans in WWII). It is very similiar to ANZAC Day - they have a big parade and the veterans march through the city streets. It was pretty amazing. That day, we were walking down the road and we ran into Ferry and Marcus, two fellas that we caught the train with from Ulaan Baatar to Irkutsk (how long ago was that!!). Very cool cats who have travelled using the couch surfing phenomenon. It has worked out well for them most of the time. Anyway, it was great to catch up and talk about all our adventures in Russia because we hadn't seen each other for a month. Very bizarre. . .

The Burg is home to one of the most expansive and impressive museums in the world. It is called the Hermitage and it is located in the Winter Palace
right on the Neva River. It costs a lot of money to get in but it is free
for students. Marcus suggested that we try our luck with our drivers
licences . . . thanks for the tip, it saved us over $35!! The building and
the art was overwhelming, we lost ourselves for over 5 hours and we still
didn't see everything. I had just read "1812, Napolean's Fatal March on
Moscow" so I regaled Adam with anecdotes about various battles that were
depicted in paintings everywhere . .

We went to another museum which was super funny - not sure it was meant to
be!! It had bits and pieces from various countries all over the world with
English narrative that was cut and pasted straight out of a primary school
project. And I quote "The Africans didn't know anything about using manure
as fertilser. They didn't even have sour cream." Brilliant and very
insightful I thought. Anyway, the highlight of this museum was a room full
of deformed babies in jars. What is with that????? We always seem to find
ourselves at freak shows...

Anyway, the Hermitage was an absolute highlight - especially after getting in for
free. It felt like vindication for the ridiculous accommodation costs we
were paying. We also tripped out to Peterhof, a Summer Palace for Peter the
Great. It was a beautiful place and the gardens were amazing with fountains
and gold statues everywhere. A ridiculous display of wealth and frivolity -
very different to the severe Soviet architecture in some of the cities we
visited. 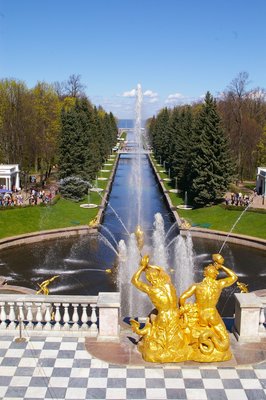 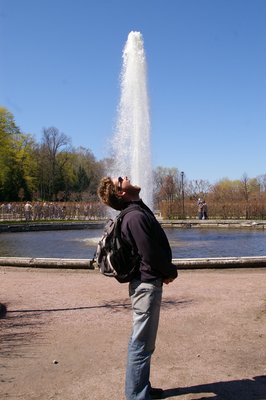 Adam being a fountain 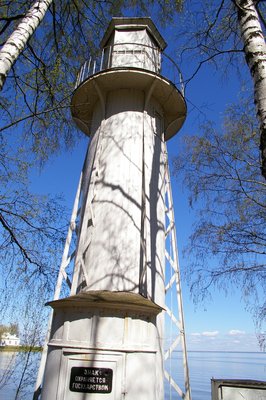 All in all, The Burg was good to us but we were ready to leave. In fact we were very ready to leave the Russian cuisine well behind, never to speak of it again. After the delights of Asia it was hard to pay
ridiculous money for really crappy food. Eating out was an ordeal every time. Needless to say, instant potato in a plastic container became a very close friend of ours. However, one of the truly beautiful things about Russia is the beer culture. As it is not a hard spirit it is not considered alcohol even though you can buy beer with 12% alcohol. Everyone drank on the streets and you can stroll to a bar drink in hand. No more sneaky travellers required. We indulged, we drank in parks, squares, pancake stands, piazzas. . .and it was cheap.

We caught a bus from The Burg to Tallinn is Estonia and we were sweating the border crossing a little. We had registered our visas in Irkutsk but not since then. . .oops . . .we got a little too blasé` . . .all was good and
we sailed through without any problems. Tallinn was lovely but FULL of tourists and tour groups FULL of pensioners wearing fishing vests and socks and sandals. I have to say that it was a bit of a culture shock, beautiful squares everywhere and not a beer in sight. I guess the socked and sandaled patrons would not have approved!!! The food on the other hand was a welcome change - we ate great pasta (with vegetables ) at an overpriced café and we have never been happier. 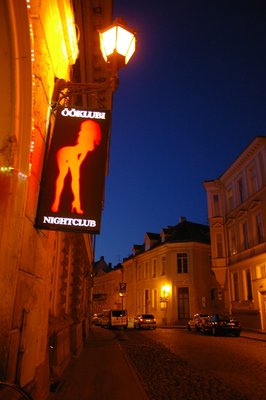 The red lights of Tallinn

We left Tallinn without seeing the real thing but it was great to wander and do basically bugger all. We fare evaded on the tram all the way to the bus station - unintentionally of course. Backpackers truly are the scum of the earth!! We crossed the border into Latvia without even getting off the bus. Ah yes. . .welcome to the European Union . . .fasten your seatbelts, it is going to be a Contikki Tour paced trip . . .

On our first night here in Riga we met a chap in the kitchen called Colin who is more English than the Queen. He would easily be in his late 60's and was the most annoying individual. He told us a story about his camera and its manual that went for twenty of our precious minutes. Then this morning (oh my god, he is staying in our dorm!!) he gave us the second chapter of the camera and manual saga. Absolutely rivetting . . . .however not as rivetting as his strip club story. I am sure that old dudes go to strip clubs (it was a strip club, mark my words) and that is cool. I JUST DON'T WANT TO HEAR ABOUT IT!!!! He reminded us of one of the evil dudes from the movie "Hostel" which we think was set somewhere in the Baltic States. We will be sleeping with one eye open tonight. Riga is quite a lovely city but again is full of socked and sandalled pensioners. They were probably all out at the strip club last night with Colin - who henceforth will be referred to as Dirty Colin or (my personal favourite) Adam's mate.

We exchanged a wad load of Estonian currency this morning and only got a few coins in return. After feeling completely ripped off we then realised that we had exchanged the equivalent of $3 ossie. No wonder they looked at us funny. One of the more amusing things we have noticed in both Tallinn and Riga is the amount of Russian restaurants, I mean seriously team, who the hell eats at them? They would be great . . . they would over charge, serve crap and provide a service second to everything. In Riga there is a restaurant listed as "Soviet". We think that you have to queue for 5 hours and then all you get is a potato. The deal is sweetened somewhat by the Latvian 80's rock vinyl display that is apparently on the wall. Brilliant . . . .

And so begins the Contikki Tour. We are doing what we despise and just spending a night or two in the centre of the cities we visit and then moving on. You can get a feel for the place but you cannot work out what makes it tick. It is very superficial and quite tiring but we can't wait to see Jen and Steve. We are also catching up with Martin (my uni mate from Bendigo days) in Prague and trail mates in Poland, Germany and Holland, Contikki Tour style of course!! It is complete madness and our heads are spinning. Hardly a minute goes by without one of us saying "What country are we in again?" It is also hard to meet other travellers in these hostels but given our current room mates that might be good thing. We just did a head count before and we have Dirty Colin, a Drag Queen and two over sized novelty fellas, amongst others. Sweet!!!!

We have found a few good campervans on the net and will look at purchasing when we get to the UK. It is all very exciting, it will be great to exchange the backpack for a set of wheels!!!

Posted by adamandmeg 08:33 Archived in Estonia

Previous Next Table of contents

Comments on this blog entry are now closed to non-Travellerspoint members. You can still leave a comment if you are a member of Travellerspoint.

If you aren't a member of Travellerspoint yet, you can join for free.